My main consultancy and advisory experience has been on irrigation. Including my four years as a technical officer in Swaziland as well as small desk-studies I might count over 20 different jobs since the mid-eighties. While my CV gives further information, highlights include:

2013 – 2015 I worked for IWMI on various irrigation policy analyses for the Water Land Ecosystems (WLE) programme.

Northern Nigeria. In 2005, I was invited by the DFID-funded JWL project to use the river basin game to bring together different stakeholders competing over different functions of the Hadejia Jama’are Komadugu Yobe Basin.

Also in 2005, I proposed a framework for irrigation and water development for the Commission for Africa.  Despite submitting a comprehensive ‘multiple technologies/institutional’ approach to doubling the area under irrigation (itself something I would question but those were the objectives), I was very surprised when the commissioning team rejected this mixed approach in favour of micro-scale interventions (bucket and treadle-pumps).

Kyrgyzstan; early 2000’s. Working with HTSPE on the DFID-funded ‘Sustainable Livelihoods For Livestock Producing Communities’ (SLLPC) project. Aside from witnessing the operation of old Soviet irrigation systems, the highlight of this was watching an inter-village goat-carcas polo match. See photo below.

India. Over three years, made a series of inputs on the World Bank funded project termed ‘Second Chennai Water Supply Project: Reassessment Of Groundwater Potential in the A-K Basin’. I was responsible for investigations of irrigation management to determine means and possible outcomes of transfer of water rights from agriculture to meet urban water needs for the city of Chennai (Madras).

Swaziland; 1985-1989. Employed by CDC to regenerate irrigation systems and management on the Inyoni Yami Irrigation Scheme (IYSIS). Very lucky to have worked with Rod Ellis, Michael Young and Pat Tobin.

The photo below is taken from Kyrgyzstan. 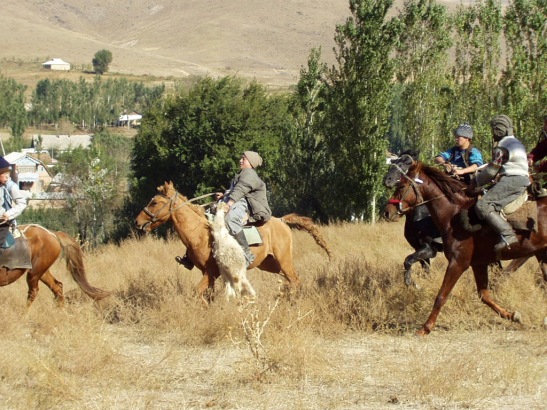